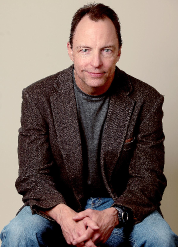 Featured on CNN’s Business Unusual, and a writer for Jay Leno on the Tonight Show for the last two decades, Frank King has been entertaining (and on occasion, educating) convention attendees on the corporate comedy speaking circuit since 1985. He was a quarter-finalist on Star Search.... he lost to a puppet. He's also appeared on An Evening at the Improv, Showtime's Comedy Club Network, and starred in an episode of Bananas on PAX TV.