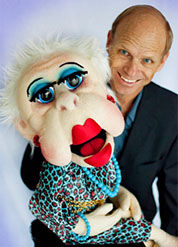 Greg Claassen can make just about anything talk…and that's exactly what he's been doing with his ventriloquist act over the last 30 years. Greg has established a reputation for unfailing audience rapport. It's hysterical fun once Greg's “friends” are unleashed on stage. It's no wonder his program is referred to as one of the most unique after dinner programs in the country.
Greg's entertainment story grows out of his determination as a young boy to teach himself the art of “throwing his voice”. At first it was entertaining for family and other small groups, but it wasn't long before Greg's hobby got totally out of hand. Only 6 years into his career, he was selected as a National Winner in the “ Bob Hope Search for the Top” comedy competition. He has performed nationally at Disney World, Orlando, Florida and Silver Dollar City in Branson, Missouri. Greg is also a featured corporate entertainer with regular appearances at Caesars Palace and the MGM Grand in Las Vegas.
Greg is known for his unusual aptitude for spontaneous humor. His intent is always to bring the audience together by taking them away from their cares for a little while. “Ventriloquism” means, literally: “speaking from the belly,” which is where you'll be laughing from when Greg Claassen leaves the stage.