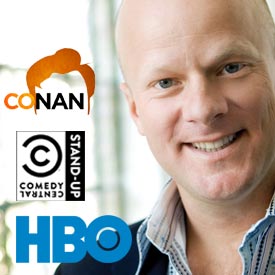 A lively and animated storyteller, John Bush has spent his life on stage making people laugh at him, with him, and thus at ourselves. John’s comedic ‘tool-box’ is filled with impressions, characters, and the ability to connect us all to a moment. Best of all, John ends his show with some of the best shadow-puppets you will ever see. Some of these shadows are down-right ‘cartoony’ and others are eye-catching in how they look exactly like the real animal. As a child, John moved from Hawaii to Minnesota. When people ask him why in the world would anybody make that move, John answers “Oh, because my entire family is…stupid.” Against that back-drop John had to develop a sense of humor and decided to take up stand-up. His career has taken him to New York where he cut his teeth in one of the world’s strongest comedy scenes. John continues to delight audience across the U.S. and abroad. You are in for a blast when John Bush performs at your special event. This year John Bush has appeared on Season 5 of AXS TV’s Gotham Comedy Live and FOX NEWS CHANNEL’s Red Eye with Tom Shillue. Other TV appearances include: Comedy Central, HBO, and Late Night with Conan O’Brien. As an actor, John has appeared on TV’s Spin City, Law and Order, and in the film The Thomas Crown Affair. One of John’s proudest achievements is performing in over 2,500 appearances of the world-wide hit play Triple Espresso – A Lightly Caffeinated Comedy. –