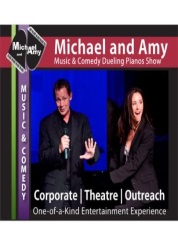 The #1 Headline Music and Comedy Dueling Pianos show your audience will love. Husband and wife, Michael and Amy, are unique and multi-talented music and comedic artists. They have creatively transformed the wildly popular dueling pianos entertainment concept into an award winning headline show hit! Their show is a magical and eclectic mix - part music, part comedy, part theatre, part concert, part improv, and all chemistry! Michael & Amy are a perfect treat for your theatrical, concert, and corporate audiences.
Corporate Entertainment: The recipe? Start with two multi-talented, musical and comedic entertainers who also happen to be husband and wife. They will engage you with their mix of fast-paced performances filled with comedy and the widest range of music you have ever heard. They will amaze you with their extraordinary talents as dueling pianos, comedians, musicians, and motivators. Add a dollop of improvisational comedy topped off with a heaping helping of audience interaction and participation. Dish it all up on two unsuspecting grand pianos for one hilarious and unforgettable serving of what we like to call - Quirkish-Delight! People are eating it up all over the world!
Performing Arts Centers: There is quite literally something for nearly everyone during Michael and Amy's show. Michael and Amy masterfully combine an eclectic mix of musical genres with humor and personal charisma. Their diverse range of popular and familiar music, some of which should never have been attempted on one piano, much less two, across-the-board humor, and complete disregard for the fourth wall instantly bring a diverse audience together in song and laughter. We're talking Nobel Peace Prize material here! Join the thousands who have already enjoyed this outrageously fun and funny music and comedy show. Michael and Amy tour nationally and internationally.
Outreach Events: Michael and Amy are unique and very multi-talented music and comedic artists. They will amaze you with their extraordinary talents as dueling pianos, comedians, musicians, and motivators. The audience is as much a part of the performance as are Michael and Amy. One moment you're singing at the top of your lungs, the next doubled over in laughter, and then... breathless. Always fun. Always exciting. Completely entertaining, amazing and engaging audiences everywhere.