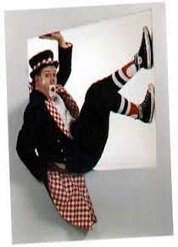 What do you get when you cross a world class clown with a nationally touring stand up comic? Toby KID, why of course. Toby combines two totally different fields of entertainment to create an entertaining show that will tickle the young to the old, tight to loose and the stern of face to the most loquacious of laughers. You could call it a clown show performed by a monologist, or a stand up comic act presented by a clown. Professionally entertaining since 1982, Toby strives to accelerate in arts that end in laughter, His research has had him performing in the top comedy clubs across America and clowning for Russian heads of state. He's performed comedy at the International Clown Hall of Fame and for the staff of the Bozo Show and clowned for the organizers and participants of the Aspen Comedy Competition. Though each type of mirthing requires a different approach, Toby has found the magic to work them all simultaneously. And speaking of magic, he may throw some of that in too, and maybe juggling, or mentalism, or an escape trick or two, or... Well, just enjoy a performance by Toby KID and you will understand.