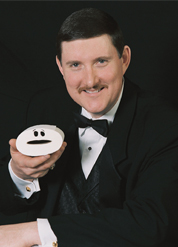 With an entrepreneurial career that spans over four decades, Tom Burgoon has wowed and impressed audiences coast to coast both on land and sea. His unique brand of comedy and magic has been showcased to a vast audience, with venues including everything from cruise lines to corporate clients such as 3M, Coca Cola and NASA. From comedy clubs and stage events in Las Vegas, Reno and L.A. to performing for President George W. Bush at the Inaugural Ball in Washington D.C., Tom has branded his unparalleled one-of-a-kind-show across our country and he has become one of the most in demand performers today. As magic is his first love, it is only befitting that you will find him performing at the Magic Castle in Hollywood – a conjurer's delight and layman's mystical dream come true.

"We've done a lot of great things over the years for our parties, but I have never seen our people laugh so hard for so long. The hypnosis was amazing! Thanks for making our party such a huge success!"
Jennifer McDonough, Director Administration
NATH Companies

"The hypnosis is something you have to see to believe! The show is in good taste and even better than the demo tape we reviewed. We never laughed so much!"
Barbara Thompson, Lockton Risk Services

"It was a major hit! Tom had us rolling in our seats with tears flowing down our faces from laughing. Definitely two thumbs up!"
Kim Moran, Administrative Assistant
MEDTEC