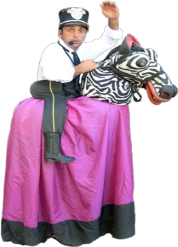 Glenn Singer is a renowned specialist in physical comedy and audience interplay. He's an artist who makes you laugh out loud, over and over and over again. He's a man who, perhaps as a young boy out riding his horsey stick in the driveway, had an important life-altering realization: "Now this is what I need to do when I grow up...." It doesn't matter if the median age of his audience is seventy, seventeen or seven. It doesn't matter if Singer is solo in a grand proscenium theatre, one of a line-up of comedic headliners in an international vaudeville festival, trotting in front of sequins and tuxedos at a charity gala or headlining at Pebble Beach or The Americas Cup, the Legend of El Gleno Grande has universal and ageless appeal. Not since Trigger have four legs been so loved. El Gleno Grande has now brought snorts of laughter on six continents during a career that spans almost 20 years. Television credits include America's Funniest People, the Statler Brothers, Showtime and broadcast specials in Germany, Japan, South America and Japan. Corporate clients span an international Who's Who including Universal Studios, Bosch, Caesar's Palace, Johns Hopkins University, the Tel Aviv Jazz Fest, United Airlines, Harley Davidson and World Cup Japan. Your evening with Glenn Singer and his equestrian spectacular can stand alone in a full 60-minute performance, can share the stage in a comedic double bill with your choice or his of the appropriate co-star, and can also serve festival formats with multiple synopsized repeat appearances. "Unique, captivating, and really, really funny. Truly, I have never seen people laugh that hard. Downtown Nashville is still ringing with laughter." - Erika Wollam, Nashville Summer Lights Festival, TN "Glenn Singer is a true Master of his art. He has studied and perfected his craft all over the world, and has been mentored by some of the greatest performers in the field of pantomime and physical comedy. He gives meticulous attention to detail in his preparation but then improvises with complete abandon. I have never seen anyone like him. I'm considering becoming a groupie." - Jemila Ericson, WHQR-FM, Wilmington, NC "A beautiful horse act." - De Volkskrant Amsterdam, The Netherlands "Glenn was a pleasure to work with — in tune with what we were trying to accomplish, and responsive to our audience. The Horse Guy has a unique, and hilarious, show. The audience loved him." - Michael Morris, Sr., Midland Theatre, KS "A crowd pleaser, a true professional, a nice guy and a very, very, very talented artist." - Jodi Wright, Dir., World Buskers Festival, Christchurch, New Zealand "He brings such fun and originality to his show that the crowd can do nothing but scream in helpless laughter." - Edmonton Journal, Alberta