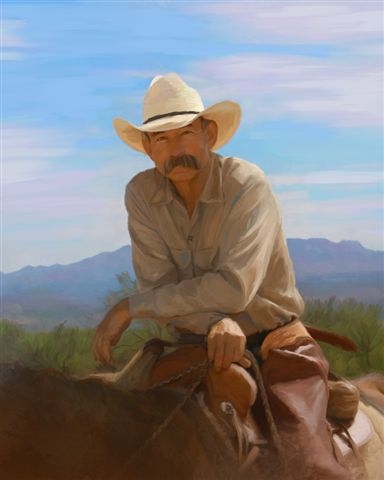 Comedian Baxter Black, described by the New York Times as ‘…probably the nation’s most successful living poet,”…thinks it’s an exaggeration. He can shoe a horse, string a barb wire fence and bang out a Bob Wills classic on his flat top guitar. "Cowboy Poet" and comedian, ex-veterinarian, and sorry team roper, he has more hair around his lip than on his head. Raised in New Mexico, spent his workin’ life in the mountain west tormenting cows, now he travels the country tormenting cowboys.
Since 1982, Baxter Black has been rhyming his way into the national spotlight, and now stands as the best selling cowboy poet in the world. He’s written several books (including one rodeo novel and its sequel), recorded over a dozen audio and video tapes, CDs and DVDs, and has achieved notoriety as a syndicated columnist and radio commentator. From the Tonight Show and PBS to NPR and the NFR, Baxter’s wacko verse has been seen and heard by millions. His works are prominently displayed in both big city libraries and small town feed stores.
Baxter lives in Benson, Arizona, between the Gila River and the Gila monster, the Mexican border and the Border Patrol and between the horse and the cow—where the action is. Everything about Baxter is cowboy; his cartoonish mustache, his personality and his poetry. He hasn’t changed a thing about his subject matter or his delivery. He makes a living shining a spotlight on the flaws and foibles of everyday cowboy life, the day-to-day ups and downs of people who live with livestock and work the land. He demonstrates that it is the truth in his humor that makes it funny. Driven by a left hand sense of humor Black evokes laughter just by being there. He still doesn’t own a television or a cell phone, and his idea of a modern convenience is Velcro chaps.
So, in a nut shell (where some believe he may have evolved) there is considerably more to Baxter than just an entertainer. He is the real thing. Because, as he says, “It’s hard to be what you aren’t.” Baxter’s philosophy is simple enough – in spite of all the computerized, digitized, high-tech innovations now available to mankind, there will always be a need for someone who can “think up stuff”.