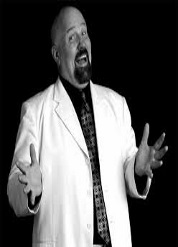 A professional boxer at age nineteen, he had 42 pro-fights and became the "Southern Middle Weight Champion." He was suspended from boxing after losing a fight on a bad decision because he remarked, "I knew I was in trouble when the judges had seeing eye dogs." After being hit over the head for eight years he realized he had a different way of thinking and became a comedian. Now John is available for live performances, conventions, and private parties.