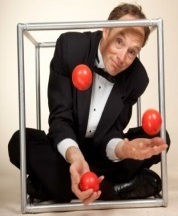 HENRIK BOTHE As a variety entertainer, Henrik Bothe walks on ladders, spins ropes, juggles without using his hands, manipulates fancy hats, and rides a unicycle that’s higher than the expectations you have for your group’s entertainment program. He walks with 4 legs, escapes from a straight jacket, and blows your audience’s collective mind as NeonMan – a glowing alien that floats and flies and mesmerizes. He brings audiences to their feet while sharing with them the most powerful of gifts – laughter.
A national and international variety entertainer, Henrik has performed in four languages, 50 states, and 22 countries since 1984. When not performing, Henrik has appeared on The Tonight Show starring Jay Leno, at Ceasars Palace in Vegas, and even did a guest spot on Garrison Keillors A Prairie Home Companion… yes a juggler on a radio show. How does he do it? Mix the gentle humor of Victor Borge, the physical agility of Seinfeld's Kramer, and the cross-generational appeal of Bill Irwin and you have some idea of what Henrik Bothe brings to the stage.