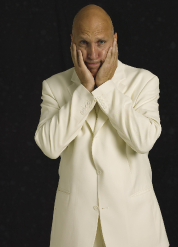 Though it’s not a fair fight, and probably ought to be stopped, it thrives and rages for the most primal of reasons — it’s endlessly mysterious, fascinating and fun! Rex Havens braves this haunting, daunting battlefield armed with the only weapon essential to survival — laughter! Based on the only two truths Rex has learned about men and women — “I’m a man . . . and I’m Sorry!” Rex’s comedy routine is a fresh approach to an ageless subject, tongue planted firmly and cleverly in cheek, and dedicated to the notion that happiness lies not in victory, but in the glory and undeniable humor of the struggle. Yes, it’s not the destination but the journey… He's entertained for over 20 years in world-famous comedy clubs like The Improv, Catch-A-Rising Star, Funny Bones and Zanies. His television credits include Showtime, Comedy Central and Comic Relief, and on radio with Bob & Tom and NPR. His corporate comedy has entertained clients including GM, American Express, Texaco, 3M, Coca-Cola, IBM, Toshiba, Lowe's, Johnson & Johnson, Ameritech, Proctor & Gamble, State Farm, Quaker Oats, Verizon and the IRS ("Working for the IRS is the only sure way to get money from them."), and numerous non-profit and charitable organizations, such as St. Jude's and the Make-A-Wish Foundation.