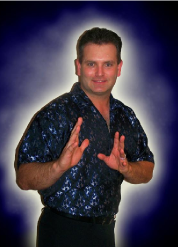 Since 1994, Steve Meade has hypnotized over 20,000 people nationwide in his comedy hypnosis show and motivational hypnosis training seminars. Audiences enjoy his shows so much he is asked back to perform another again and again.
His Virtual Reality Tour Comedy Hypnosis Show is a comedy hypnotist show where the volunteers and his audience are held spellbound as they are taken on a lifelike mental vacation using the power of hypnosis and their minds.