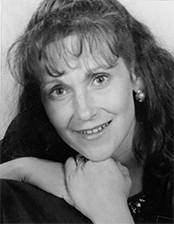 One of the funniest female Comic/Magicians in the country for over 20 years. Janene Harris's fun upbeat personality, audiences participation, and clean humor makes her show appropriate for any type of event. From Company Picnics and Corporate Functions, Christmas Parties, and School Assemblies, to Trade Shows, Awards Banquets, and National Conventions, Janene has entertained all types of audiences, and can make any show an enjoyable one. She's entertained for CBS Channel 10-11 in Lincoln, Nebraska, national conferences in Phoenix, Arizona, and is a past talent winner at the University of Nebraska, and the Miss Nebraska and Nebraska Czech Queen Contests. Janene is the consumate entertainer, and most importantly, she is one of those rare individuals who is easy to work with, and genuinely cares about your needs and the all around success of your event. Coming from a family of Magicians, where her father told her to "Entertain an Audience first...and Fool them second," Janene Harris has her own unique style, and can honestly say that she is one the few female Comedic Magicians in the world. What if you wanted to do Magic and Comedy but were a woman? After all, everyone knows that "Magic" is a male dominated hobby and profession...right? In the case of a girl named Janene Harris, when you're 4 years old and you start performing in your Father LeRoy Becwar's traveling Magic Show, you don't know any different. Whether she was jumping out of boxes, floating in mid-air, or pulling rabbits and doves from hats, Janene started early in the "Magic" field. She performed comedy and magic with her brother Gayle in college, and graduated in 3 years with high distinction honors in Elementary Education from the University of Nebraska. Today, when she's not teaching Kindergarten at Lincoln Christian School, Janene performs entertainment for all types of audiences. Taking her "magic" all over the USA, she entertains with audience participation, and a funny, ad libbing style, (a personality similar to Carol Burnett).