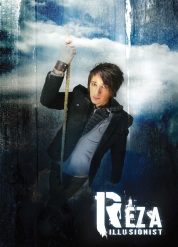 Hailed as the Nation's Top Touring Illusionist, Reza has sold out venues from Denver to New York, Orlando to Los Angeles, entertaining millions as well as being featured on television and radio in 31 Countries around the World. Reza has made his presence felt in the world of illusion since a very young age. His focus in the art began at the early age of seven after being inspired by a magic show in his hometown of Brookings, South Dakota. By the age of fourteen, Reza was landing significant gigs performing for resorts and large corporations across the Midwest. On his fifteenth birthday Reza left his hometown in South Dakota to perform a six week run in Branson, MO, the live entertainment capitol of the world. The grueling eighteen-show-a-week schedule allowed Reza to hone his gift for entertaining. After Branson, one opportunity led into the next and as the doors began to open, Reza’s style took on a fresh and cutting edge feel. With a largely original show and an engaging stage presence, Reza began selling out theatres as the entertainment world took notice. Fast forward to present day. The once youth magician prodigy is today one of the fastest rising stars in the industry, with his mind set on changing the world’s perception of magic. Reza is intriguing, engaging, and captivating. He has the ability to connect with his audiences and let them feel his magic on a personal level. He isn't just a magician. He is an entertainer.